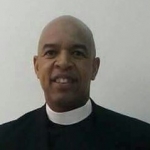 Hummons, 60, was seated in her wheelchair on a walkway outside the apartment building where she lived when a man approached her from behind and without provocation began to stab her repeatedly.

Carpenter, 48, pastor of Cincinnati, was leaving the building and saw the assailant striking Hummons.  He shouted as he approached them, the assailant then pulling Hummons from her wheelchair to the walkway.

As Carpenter knelt to tend to Hummons, the assailant stabbed him underneath the chin from behind.  Carpenter stood and was stabbed again, in the abdomen.  He grabbed the knife, breaking it in two and retaining the blade.  The men struggled, during which Carpenter delivered defensive strikes with the blade against the assailant, inflicting injury.

The struggle took them to the ground, where Carpenter threw the blade aside and held the assailant down until police arrived and arrested him.

Hummons died at the scene of her injuries.  Carpenter required hospital treatment, including sutures, for his stab wounds and lacerations, and he recovered. 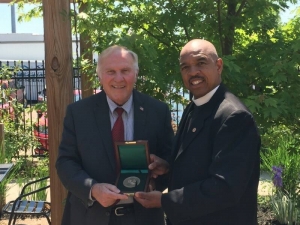 “Rev. Carpenter’s actions epitomize the award, and we are fortunate to have individuals like him living in our community,” Chabot said.