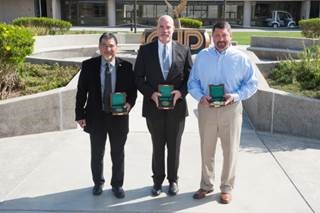 On February 20, three recently awarded heroes involved in two different rescues came together to be honored in front of family members and a large number of California Highway Patrol officers and cadets in Sacramento, Calif. The ceremony, originally intended to recognize just Perry Hookey and Lance O’Pry for a January, 2013 rescue of a man trapped in the burning wreckage of the cab of his tractor-trailer, also included Donnie Navidad.  Navidad’s rescue involved breaking the fall of a woman who fell from a ledge atop the highest deck of a stadium.  The California Highway Patrol, which responded to the burning vehicle accident, also assisted the Hero Fund in its investigation of the case, and graciously invited Navidad when they learned he lived in the area. The ceremony was held at its Academy in West Sacramento.   The three rescuers were awarded their medals at the September 2014 meeting of the Hero Fund’s board. Hookey, is from Vacaville, O’Pry from Napa, and Navidad lives in Stockton.