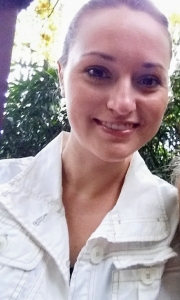 Svetlana S. Reut rescued 9-year-old Cameron Wagstaff from three attacking dogs on Jan. 24, 2018, in Loganville, Ga. Cameron was playing outside when three pit bull dogs, all weighing about 70 pounds, knocked him to the ground and bit him. Cameron screamed for help, and Reut, 29, medical lab technician, responded. When she reached Cameron, the dogs were gnawing and clawing his face. She grasped Cameron by the hand and pulled him to his feet. They ran to a nearby yard and became separated. The dogs then attacked Reut, knocking her to the ground and biting her face and arm. The dogs’ owner responded and took one of the dogs back to his yard. Cameron, who had remained nearby, and Reut retreated to her house, and the other two dogs ultimately left the vicinity. Cameron was treated for his injuries. Reut was taken to the hospital for treatment of her injuries, which included bite wounds to her mouth and arm.