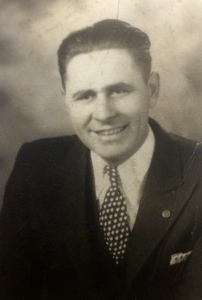 Noah V. Langston saved Delilah E. Arnold from drowning, Sperry, Oklahoma, June 2, 1922.  While wading and trying to swim in Bird Creek, Delilah, 14, got into water eight feet deep.  Clinging to a companion, who was a poor swimmer, she moved farther from wadable water.  A man swam to her, but she grabbed him at the neck and he could not swim with her.  Langston, 21, a real estate salesman, then swam to them and separated them, freeing the other man to return to wadable water.  Delilah grabbed Langston’s necktie, and the necktie choked him somewhat. Langston went under the surface once or twice, and in his efforts to get his breath, he swallowed some water.  Langston then swam 18 feet with Delilah holding to the necktie, and as he got within reach of wadable water, he became unconscious.  A boy standing in wadable water took Delilah out and then got hold of Langston and carried him to the bank.  He was revived.

That is what it says in the files of the Carnegie Hero Fund, but is that the entire story?  Not at all.  As Clarence the angel says in the movie It’s A Wonderful Life, “Each man’s life touches so many other lives.  When he isn’t around he leaves an awful hole.”

Noah V. Langston was born in 1900, one of 10 children in a mixed-race farming family living in rural Arkansas; the family spoke both English and Cherokee.  At a young age, Noah moved with his family to Oklahoma, where, as a young man, he decided there must be more to life than the farm.  He left for the city and worked at several jobs, including as insurance salesman for such companies as Home State Life Insurance.  He did well in his work despite many challenges—and the Great Depression—and won awards for his sales.   He even married the boss’s daughter at one of his jobs and began a family.  A member of the Masonic Lodge and a Shriner, he had a full life.

When he received his Carnegie award in 1926, Noah had the Hero Fund hold its accompanying monetary grant for him until he asked for it.  This was done at that time.  After World War II, he asked for the funds, as he wanted to send his son Don to college.  Although Don was the younger of the children, Noah’s daughter Nita thought it would be better for her brother to have a higher education.  So Noah sent Don off to college, where he attained two undergraduate degrees and attended medical school to become a pediatrician.  Don worked hard, marrying a nurse along the way, and became the head of a hospital in Anchorage, Alaska.  He was there on Good Friday in 1964 when the 9.2 magnitude earthquake hit.  Although the hospital was damaged, its staff managed to help save many lives.

A few years later, Don found himself in Phoenix, Ariz., on staff at a few hospitals and in a group practice.  He helped to set up neo-natal care units for premature babies and assisted with air evacuation of babies in distress from rural areas.  He saved many children who might not have made it without him, including a child who was choking in a restaurant.

Noah was my grandfather.  Don was my father, and the nurse he married was my mother.  If Noah hadn’t saved Delilah, he wouldn’t have been able to help his son become the doctor who in turn saved hundreds more.  If Don hadn’t been a doctor, he wouldn’t have met my mother, and I wouldn’t be here.

One life does touch so many others.  Every action affects so much.  Stories of heroes continue far beyond their heroic acts.