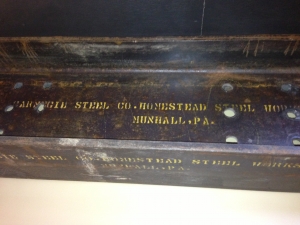 As it turns out, Andrew Carnegie’s undergirding of the Hero Fund is both fiscal and physical. His gift of $5 million in 1904 established the Commission, which over the following 112 years has given almost $39 million to awardees of the Carnegie Medal and their families. The physical undergirding comes in the form of literal girders. Steel beams bearing the name “Carnegie Steel Company, Homestead Steel Works” were uncovered during the recent renovation of a ground-floor space in the Koppers Building, downtown Pittsburgh, in which the Hero Fund has its offices.   Commissioned by Andrew W. Mellon and completed in 1929, the building was named after the Koppers Chemical Corporation and is one of the major distinctive and recognizable features of the city. The Hero Fund has been a tenant since 2008.