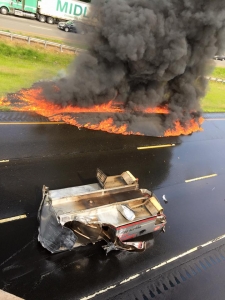 Angiletta, 36, was driving a tank truck on an interstate highway when the vehicle malfunctioned and crashed into a concrete support column of an overpass. The truck’s cargo tank, which contained 2,700 gallons of heating oil, detached from its frame and, compromised, released its contents to the underside of the overpass and to the roadway and median.

The badly damaged remains of the vehicle came to rest beneath the overpass, with Angiletta, wet from the fuel, hanging by his safety belt from the driver’s side of the cab. The spilled fuel caught fire in the vicinity of the wreckage.

Shaw, 54, truck driver of Wallingford, Connecticut, had been driving behind the tank truck and witnessed the accident. He stopped at the scene and heard Angiletta moaning. Shaw went underneath the overpass, which was dripping spilled fuel, approached the wreckage of the cab, and saw Angiletta.

Standing in fuel with flames nearby, Shaw grasped Angiletta by the arms and pulled on him but then realized that he was caught by his safety belt. Shaw reached into the cab and removed the belt to free him.

He then grasped Angiletta by the arms again and pulled him away from the cab and burning fuel.

Angiletta was hospitalized for treatment of his injuries, but he was not burned.