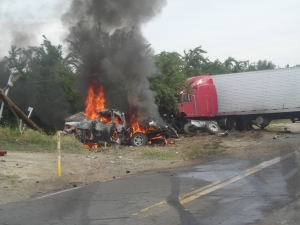 Willoughby, 19, was the front seat passenger in a pickup truck that collided with a tractor-trailer on a two-lane road. The pickup truck caught fire.

Dorrity, 64, disabled truck driver, lived nearby and heard the crash. He drove his vehicle to the scene, where he saw flames on the pickup truck and Willoughby in the passenger seat. Electric lines from a nearby power pole were draped above the truck. Dorrity reached his arms through the window opening and grasped Willoughby, but a part of the window frame was blocking the opening and Dorrity could not move him.

Dorrity picked up a metal bar and used it to pry away the part of the frame to the side of the opening. He then reached through the opening and released Willoughby’s seatbelt, grasped him underneath the arms and pulled him head first through the window opening. Dorrity helped Willoughby to his feet and away from the burning vehicle.

The two had only walked a few steps before an explosion occurred at the truck, knocking them to the ground. As they moved farther away, the electric lines fell onto the truck, which was shortly engulfed by flames.

Willoughby was treated at a hospital for a head injury and broken ribs. Dorrity was not injured.