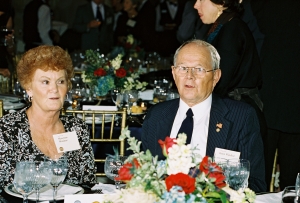 Melvin E.—“Gene”—Windsor, 74, of Myrtle Beach, S.C., died Aug. 24, 2014.  He was one of four men to be named awardees of the Carnegie Medal for their heroic actions in the wake of the crash of an Air Florida jet in Washington, D.C., on Jan. 13, 1982.  During a winter storm, the jet struck a bridge shortly after takeoff from National Airport and, breaking apart, fell through ice on the Potomac River.  Windsor, then 41, was an officer for the U.S. Park Police, working as a rescue technician for its aviation section.  Although the section’s chief pilot, Donald W. Usher, had earlier concluded that it was “absolutely inconceivable that we would fly” under the prevailing conditions, he and Windsor took the unit’s jet-powered Bell Ranger helicopter to the scene, where they found six of the flight’s 79 passengers and crew among ice floes in the river at points about 250 feet from the closer bank.  With Usher piloting the craft, Windsor worked unsecured through the helicopter’s open door as they made repeated passes to the victims, dropping a line to them and pulling them to the bank one at a time. For one of the victims, Windsor stepped from the cabin to stand on a skid, reached down for the victim, and held to her as they were ferried to the bank.  Both Windsor and Usher were awarded the medal later that year, along with two other men, who entered the river from the bank to participate in the rescues.