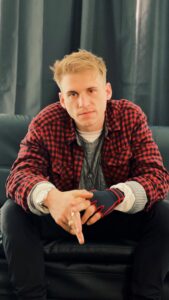 Carnegie Hero Norman Tanner Olsen is still recovering from injuries sustained while saving a man from burning on Sept. 1, 2019, at a remote mountain campground near Kamas, Utah. A 59-year-old man attempted to light a campfire using gasoline but accidentally spilled some of the fuel on himself, which ignited and engulfed him in flames. Olsen, 23, a university student of Holladay, Utah, immediately ran to him, grabbed him in a bear hug and took him to the ground. As the man, fully aflame, continued to burn, Olsen used his arms and body to smother the flames. Others poured water on the man’s smoldering clothing, and both men were taken to the hospital for treatment of severe burns.