As part of the Carnegie Hero Fund Commission’s recent milestone of recognizing 10,000 civilian heroes, two pieces of historic art were unveiled at the Power of One event held in June 2018 in Pittsburgh.

Tenured letter artist, calligrapher, and designer John Stevens completed two pieces of calligraphy — an artful rendition of founder Andrew Carnegie’s original deed of trust for the organization and the first few pages of the Roll of Heroes and Heroines, which will eventually be incorporated into a bound book.

The two framed items will be displayed in the Hero Fund’s Pittsburgh office. The roll of honor fulfills the last line of the Commission’s deed of trust, which requires that “A finely executed roll of the heroes and heroines shall be kept displayed in the office at Pittsburgh.” 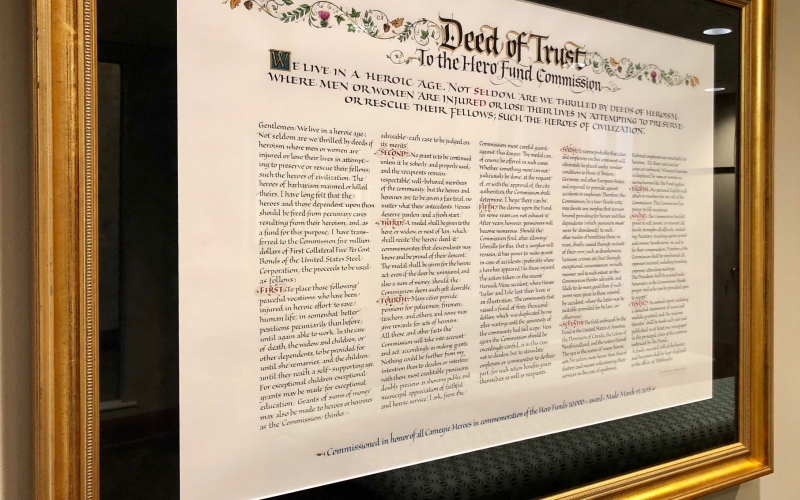 The Deed of Trust designed, lettered, and drawn by renowned calligrapher John Stevens of Winston-Salem, N.C. The Deed of Trust was commissioned in honor of all Carnegie heroes in commemoration of the Hero Fund’s 10,000th award made in March.

In his initial talk with Commission President Eric Zahren, Stevens said he sensed “a good social purpose” to the project.

“It’s the kind of project that is becoming rarer. I could see it was a worthy project. I liked how interested [the staff was] in the project—artists appreciate an audience,” said Stevens, who works out of his home in Winston-Salem, N.C.

Zahren said Stevens was uniquely qualified to complete the project. “From the very beginning it seemed that John took a sincere interest in the Carnegie Hero Fund, especially the courage and sacrifice of our awardees,” Zahren said. “Our only request was that he reflect these core ideals in his work.”

The Deed of Trust and Roll of Honor took nearly six months for Stevens to complete; it was what he called an “ambitious” project.

“A calligrapher is an illuminator and a scribe,” he said. “It was a challenge. It’s not natural to sit down for hours and work by hand. The process is long, and every job is different. You must be self-directed and mindful of the deadline even though this is not a job you can rush. It is very methodical.”

Because this was a text-heavy piece, Stevens said he was adamant about striking a perfect balance between text and decoration.

In addition to the text, Stevens applied gold leaf, vibrant colors, and a floral design, all qualities of illuminated manuscripts and traditional calligraphy. The floral work that flank the title of the Deed of Trust is the same flora—oak, ivy, thistle, and laurel— that is found on the back of the Carnegie Medal. 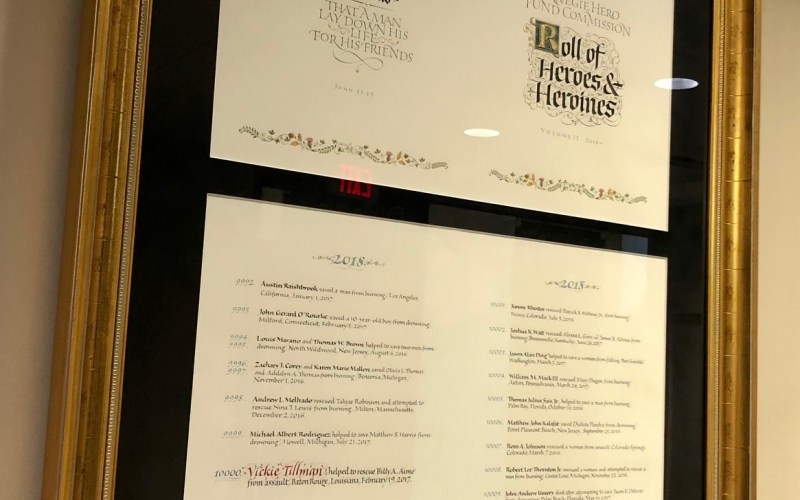 On temporary display in the lobby of the Koppers Building in downtown Pittsburgh, the first few pages of what will become the Roll of Heroes and Heroines, a listing of Carnegie heroes, for permanent display in Commission offices.

Stevens will continue his work with the Carnegie Hero Fund, incorporating the names of future heroes and heroines into the roll of honor.

Zahren described the Deed of Trust and Roll of Heroes and Heroines as a “visible link to the work we do and the reasons we do it.”

“It remains our guiding light as we go about our daily work. To have it displayed, along with the names of heroes we have recognized and continue to honor, should inspire all of us,” he added.

Before the two pieces return to their permanent home in the Commission’s offices on the 11th floor of the historic Koppers building in downtown Pittsburgh, they will remain on temporary display in the lobby of the Koppers building.

On Oct. 6 and 7, the building was opened to the public as part of Doors Open Pittsburgh 2018, an event that invited visitors to tour the historic buildings of downtown Pittsburgh and surrounding neighborhoods.

In addition to experiencing the opulent marble detailing and decorative bronze work of the art deco building, for which the Koppers building is known, guests viewed Stevens’ calligraphy work and learned about the values dear to the Carnegie Hero Fund Commission.