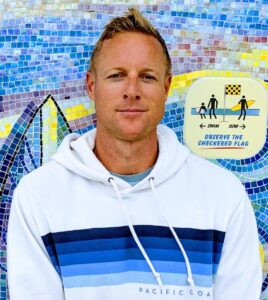 An unconscious, 10-year-old girl was floating in the Pacific Ocean about 375 feet from shore off the coast of San Diego on May 14, 2020. The 62-degree water was turbulent with large and frequent waves and a strong rip current. Neil Andrew Garrett, a 39-year-old aviation electrician of Santee, entered the water and swam to the girl. Hugging her to him with one arm, he sidestroked back toward shore, but made little progress in the rough conditions. They were repeatedly struck and submerged by waves, and at one point, Garrett lost his grip on the girl, but quickly recovered her. A surfer approached them, and they placed the girl on the surfboard, the surfer moving her to shore while Garrett swam behind them. The girl was revived on shore and taken to a hospital; Garrett was nearly exhausted after the rescue, but both of them recovered.