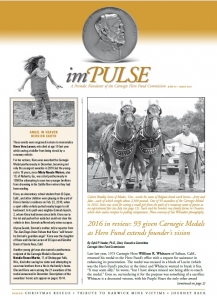 The March 2017 edition of imPULSE, the Commission’s quarterly newsletter, can be read online. This issue includes resumes of the latest awardees’ heroic acts, as well as a review of the Commission’s 2016 calendar year and updates on several awardees and beneficiaries, including Carnegie Hero Liane Wood, who was profiled on a Canadian television show with her service dog; recent master’s program graduate John Thanos, whose father and grandfather were posthumously awarded the Carnegie Medal in 2009; and Carnegie Hero Dennis Francis Keefe, who plays Santa Claus in and around New York City.

Also included in this edition is coverage of the Commission’s recent medal presentations to Keoni Bowthorpe who was awarded by Hawaii Governor David Ige; Scott R. Williams who received his medal at a ceremony at the Vermont Statehouse; Isbel Jimenez who was presented by Breckenridge (Texas) Fire Chief Calvin Chaney; Todd D. Clausen who was awarded the medal by Sioux City (Iowa) Mayor Robert E. Scott; Matthew R. Bartholomew who received his medal from volunteer presenter and Carnegie Hero Glenn S. Bingham at a meeting of the Chesterfield County (Va.) Board of Superviers; Adam Joe Martin and Bradley C. Runions who were presented by Bass Lake (Wis.) Fire Chief Marvin Mullett at a Sawyer County (Wis.) Board of Supervisors meeting; and sheriff’s deputies Joe L. Serrano and Adrian Gallo who received their medals from Commission Executive Director Eric P. Zahren.

Other features include an article about the CBS Sunday Morning segment, which received favorable reviews, a visit to the Commission offices from Carnegie Hero Paul J. Archambault, and the establishment of a rescue station in Cocoa Beach, Fla., dedicated to Carnegie Hero Fred Hunt, Jr., who was posthumously awarded the medal in 2008.

Finally in this edition, Board Chair Mark Laskow discusses why it’s important for the Commission to tell the stories of its Carnegie Heroes, the sister of posthumous awardee Bruce Douglas Badgett writes about her beloved little brother, we show that the graves of two more Carnegie Heroes — Robert H. Rutherford and Paul H. Olson — were marked with bronze medallions, and, in “From the Archives,” we look back at a 1926 rescue in the Pacific Ocean, off the coast of Laguna Beach, Calif.