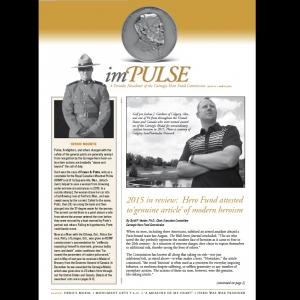 The March 2016 edition of imPULSE, the Commission’s quarterly newsletter, can be read online. This issue includes resumes of the latest awardees’ heroic acts, as well as stories reviewing the Commission’s last year and recent medal presentations. The newsletter also details a recent mural that includes Carnegie Hero Nazareth A. Tomasetti and a restored gravestone of Carnegie Medal awardee Dmetrie Benuik.

Other stories include one written by the granddaughter of Carnegie Hero Noah V. Langston, who went on to touch many others, a recent book written by Carnegie Medal awardee Paul J. Lessard, and a California radio show host whose interviewing Carnegie Heroes weekly.

In other news, the Hero Fund recently looked back on the life of awardee Karl J. Laux, who received the Carnegie Medal in 1931 and then was made a prisoner in Germany.