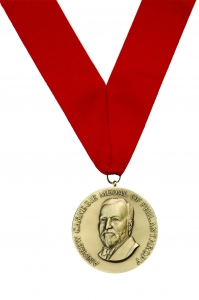 The Carnegie Corporation of New York has announced that the ninth biennial awarding of the Carnegie Medal of Philanthropy will be held on Oct. 3, 2017, in New York.  Inaugurated in 2001 to mark the centennial of Andrew Carnegie’s philanthropies, the medal is awarded to those who emulate him by giving of their private wealth for the common good.

The eight recipients of this year’s medal have been chosen by a selection committee and will be announced during a public forum in June highlighting the role of philanthropy in the new political climate.  Past awardees of the medal include Michael R. Bloomberg, Ted Turner, George Soros, and the Gates, Rockefeller, Heinz, Tata, Mellon, Hewlett, Packard, and Cadbury families.

Representatives of the 20-plus institutions founded by Carnegie, including the nine extant hero funds, will have an informal “business meeting” during the two-day event, which will include the award ceremony in the Celeste Bartos Forum of the New York Public Library and a reception at the Carnegie Corporation’s offices on Madison Avenue.  Representatives of the hero funds, which have formed the Carnegie Hero Funds World Committee, will gather separately.