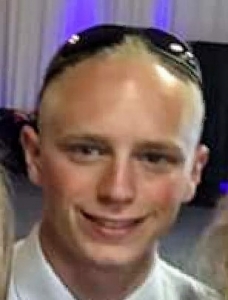 Kelvin J. Yde, 20, was trapped inside his burning car after a June 19, 2019, accident on an interstate highway near Yorkville, Wis. Justice Michael McBain, 21, recreational vehicle technician of Sturtevant, Wis., stopped at the scene. He ran to Yde’s vehicle which was burning along the passenger side. Forcing the driver’s door open, McBain found Yde pinned against his seat by the steering wheel, beneath the collapsed windshield. McBain partially entered the sedan and pushed the damaged windshield off Yde. He then used a pocketknife to cut Yde’s seat belt. Reaching around Yde’s torso, McBain yanked Yde from behind the steering wheel and out of the car. Two other motorists helped McBain carry Yde to safety. Yde suffered multiple injuries, including broken bones, but he was not burned.