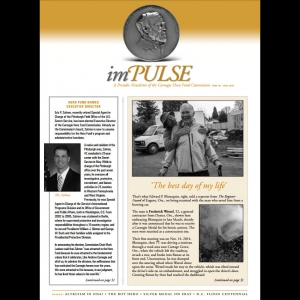 The June 2016 edition of imPULSE, the Commission’s quarterly newsletter, can be read online. This issue includes resumes of the latest awardees’ heroic acts, as well as the announcement of the Commission’s new executive director, Eric P. Zahren, and his thoughts about the organization and its mission.  Also included are the Commission’s most recent medal presentations and  an article detailing the most recent study searching for a heroism gene.

Other stories include a retelling of the actions of Carnegie Hero William P. Clark, who saved a man from drowning during the 1916 flood in Western North Carolina, Carnegie Heroes Joseph Okenotego and Joseph Kijigobinessi, Native Americans who rescued three men from drowning in Lake Michigan, and a third on Carnegie Hero Thomas H. McCann, the sixth recipient of the Carnegie Medal.

In other news, two people recently conducted presentations on the Hero Fund in elementary schools in Wisconsin and Wyoming, a rescuer and the man he saved were reunited, and one Carnegie Hero reflects on what the Medal means to him.