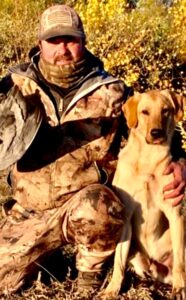 Jason J. Hahn, a 48-year-old business owner of Mason City, Iowa, stopped at the scene of an overturned pickup truck on April 5 off a rural Mason City road. The truck’s driver, 61-year-old Donna K. Rench, was suspended by her seat belt inside the truck that had come to rest on its passenger side. Smoke filled the cab making it impossible to see Rench. Hahn broke out the truck’s windshield with the help of another man. Flames by then had spread to the truck’s engine and entered the cab on its dashboard. After retrieving a knife, Hahn partially entered through the windshield and cut the seat belt, causing Rench to fall into the cab’s back seat. With the other man grasping Hahn’s belt, Hahn felt blindly around the back seat area until he found Rench, then held to her as the other man pulled Hahn and ultimately Rench to safety. Rench sustained fractures, lacerations, and contusions to her body, but she was not burned. Hahn, who had inhaled smoke, was treated at a hospital for an injured right shoulder and a laceration that required sutures. He recovered.