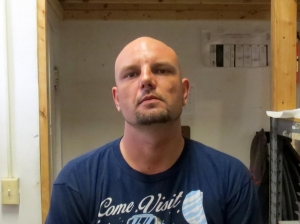 Knight, 29, was driving a car down a sloped street in a commercial district near the end of a two-hour torrential rainfall that created a flash flood covering the roadway and sidewalks.  Several vehicles that had been parked in the vicinity were washed away by the raging current.

From the raised entryway of a building just off the sidewalk at the scene, Barnes, 36, business operator of Westminster, saw Knight approach.  He stepped into knee-deep water on the sidewalk to direct her to the near curb, but the current knocked him from his feet and swept him several feet away.  He regained his footing and returned to the entryway as Knight angled her car to the curb.

Barnes and three other men at the scene formed a human chain, Barnes at the far end, that extended from the entry toward the car, but Barnes’s reach fell 3 feet short of the car.

After Knight climbed partially through the window of the passenger door, Barnes released from the chain and waded to the car, briefly losing his footing in the current, which struck the car forcefully and gushed up along its sides.

He lifted and carried Knight to the others in the chain and helped her to the entryway.  Barnes recovered from cuts to his hands, feet, and torso.