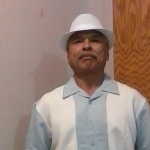 Marshall, 59, was in her mobile home at night after a fire broke out in its living room. At his home nearby, Jimenez, 47, pipefitter of Winters, Texas, saw flames issuing from the structure and immediately responded to the scene, where he learned from others that Marshall was still inside.

As flames were blocking the mobile home’s front door, Jimenez propped a board against the structure and used it as a step to access a small window, the base of which was about five feet off the ground. Jimenez entered the mobile home through the window, finding himself in a bathroom, where heat was intense and the smoke severely restricted visibility. He searched for Marshall, finding her unresponsive on the floor in that room. Maneuvering her to the window, he lifted her and handed her out to two police officers who had responded. They lowered her to the ground, after which Jimenez escaped to safety through the window.

Both Marshall and Jimenez received hospital treatment for smoke inhalation, and they recovered.

Breckenridge Fire Chief Calvin Chaney presented Carnegie Hero Isbel Jimenez with the Carnegie Medal on Jan. 13 at the Stephens County Courthouse. Jimenez was awarded the Carnegie Medal in September, 2016, after he entered a burning mobile home through a window, and then maneuvered, lifted, and handed the woman inside to two police officers who had responded to the home’s exterior.