Sanchez, 23, business manager of Stockton, was nearby and heard the crash.  He responded to the scene, where he approached the driver’s side of the sport utility vehicle but found both doors on that side jammed shut.  Then going to the passenger side, he opened the rear door, fully entered the car, and, requiring multiple attempts, worked to free the boy from his seat’s restraints.  He then lifted the boy from the seat and backed through the opened door with him, flames by then issuing along the underside of the vehicle to impinge on his legs.

Flames grew also to enter and shortly engulf the front of the passenger compartment.  The boy was taken to the hospital for observation, and Sanchez sustained only minor ill effect that did not require treatment. 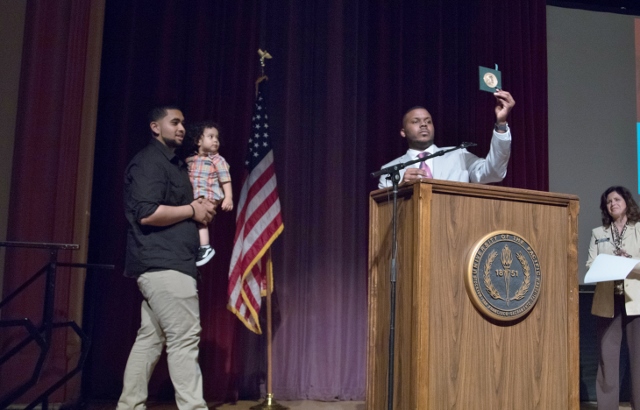 In front of a crowd of about 400 people, Stockton, Calif.,  Mayor Michael Tubbs presented Carnegie Hero Humberto Sanchez III with the Carnegie Medal.

The presentation was part of Tubbs’ state of the city address event that took place on May 18, 2017. According to Tubbs, Sanchez is an example of why he has so much faith in the community of Stockton.

Sanchez also received a key to the city of Stockton and several commendations from state and federal officials.