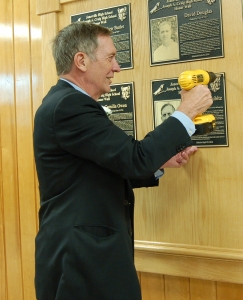 Shown helping to install his plaque on the “Wall of Honor” at Janesville (Wis.) High School, 2008 Carnegie Medal awardee Kermit R. Kubitz was cited by his alma mater in April 2016 for dedicating his life to serving his country and improving the lives of others.  The school has so honored 41 of its graduates since the wall was created 10 years ago.  In an assembly, Kubitz, a 1964 graduate—he was the salutatorian—encouraged the high schoolers “to be empathetic and heroic in their own lives,” and he paid tribute to his hometown for instilling the moral roots of his character.  While in high school, Kubitz was a member of the National Honor Society and the debate team, which won a state championship.  He then earned a degree in economics from California Institute of Technology before serving during the Vietnam War, winning Bronze Stars for courage and selflessness under fire.  Returning home, he earned degrees in law and business from Harvard University and made his career as an attorney.  In May of 2007, Kubitz, then 60, was in a bakery in San Francisco, Calif., when he stopped a man who was attacking a teenaged girl with a knife.  Kubitz himself was stabbed twice during the rescue, requiring hospitalization.  Hats off, Kit!