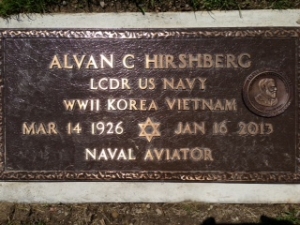 The Hero Fund provides grave markers—bronze medallions cast in the likeness of the Carnegie Medal—at no cost to the families of deceased awardees.  One such was provided to the family of Alvan C. Hirshberg, who died at age 86 on Jan. 16, 2013, and is buried in the Children of Israel Cemetery, Haverhill, Mass.  Hirshberg was awarded the medal in 1962 for saving the four-man crew of a turboprop airliner that crashed at New York Municipal (now LaGuardia) Airport on Sept. 14, 1960, and—upside down—caught fire.  The plane had been carrying 3,000 gallons of fuel.

The 70 passengers aboard the flight, including Hirshberg, then 34, president of a family business, escaped serious injury and ran from the wreckage.  When he saw that the crew was trapped in the cockpit, he returned to the plane and tried without success to break out a cockpit window.  Taking a quarter from his pocket, Hirshberg then pried the external lever securing the window until he could get a grasp of it to release the window.  Standing only 15 feet from flames on the fuselage, Hirshberg pulled the first officer through the window opening and then with him removed the other three men.

“I’m no hero,” Hirshberg said of his actions.  “This was the result of my Navy training.”  Hirshberg was a Naval lieutenant commander, having served in the Pacific battle theater during World War II and then with a Navy Reserve flight squadron, retiring in 1986.