Ruby Hattie Lindsay, 15, schoolgirl, saved Marjorie Hobbs, 20, from being killed by a train, Cape Girardeau, Missouri, April 19, 1924. Mrs. Hobbs and Ruby were walking on a single track railroad bridge about 60 feet from the ends of the bridge when they saw a train approaching at a speed of 15 m.p.h. Ruby got refuge on a narrow beam that extended two feet beyond and two feet below the ties, but Mrs. Hobbs was so frightened she could not move. Climbing to the track and taking a step or two, Ruby grabbed Mrs. Hobbs around the waist, led her to the beam, and pulled her down on it when the train was less than 30 feet distant. They lost their balance and fell 10 feet into water 10 feet deep. Neither could swim. They went under momentarily several times, Ruby still holding Mrs. Hobbs with one arm and paddling with the other. Ruby then caught hold of a pole that was extended to her from the bridge, and shortly afterward a man arrived in a rowboat and took both to the bank. Mrs. Hobbs was unconscious but revived. Ruby struck the bridge as she fell and received a severe cut on her head. 24217-2099 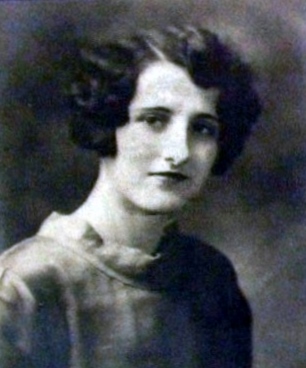