Richard J. Gandolfo helped to rescue Mercedes C. Ramos from burning, East Patchogue, New York, April 20, 2018. Ramos, 19, was trapped inside a burning sport utility vehicle after an accident in which the front of her vehicle became wedged beneath a truck. Flames broke out on the vehicle’s hood and spread to its interior. Gandolfo, 55, police officer, who was on duty and responded to the scene, attempted unsuccessfully to open the vehicle’s doors. A passing male motorist opened the rear, driver’s-side door. As flames burned inside the car, Gandolfo and the motorist worked together to move Ramos to the back seat and then from the vehicle. Another man joined them and helped move Ramos away from the vehicle, which was shortly engulfed by flames. Ramos sustained second-degree burns to her legs and a broken ankle. Gandolfo sustained smoke inhalation and burns to both hands; he recovered. 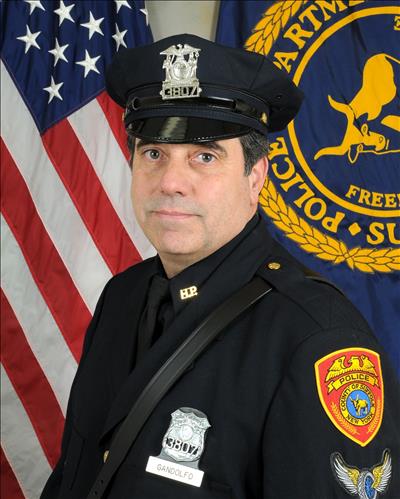