Rafael A. Rodriguez helped to save a woman from falling, Henderson, Nevada, June 1, 2020. The woman, 30, clung to the outside of a chain-link fence on an overpass bridge at night and threatened to fall to an interstate highway 40 feet below. Rodriguez, 38, state trooper, was called to the scene and saw the woman, who was distraught and crying, perched atop a concrete barrier and clinging to the fence above the highway. Rodriguez spoke to the woman in an effort to calm her, and when other officers arrived, one of them hoisted Rodriguez up onto the fence, which was curved toward the overpass. Chapman climbed up the fence with difficulty to its top and carefully maneuvered himself to a position on the fence above the woman. Releasing the fence with his right hand, Rodriguez removed two sets of handcuffs, one at a time, and put them on the woman’s wrists, which he held with his left hand, and secured each handcuffed wrist to the fence, A fire truck arrived and extended a rescue ladder with a bucket to remove the woman, who was not injured, from the bridge. Rodriguez sustained a minor muscle injury; he recovered. 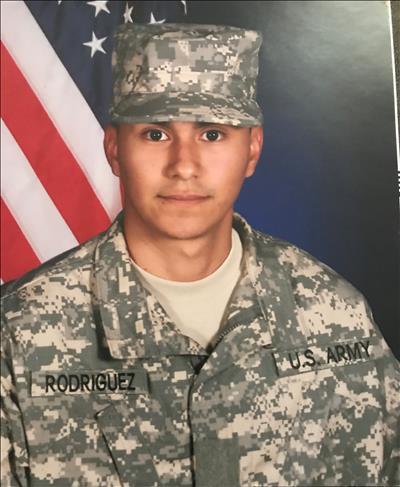