McKenzie McKay Guffey saved Jeffrey Hakner from burning, Rye, New York, July 17, 2014. Hakner, 45, was trapped inside his sport utility vehicle after a nighttime accident on an interstate highway in which the vehicle overturned onto its driver’s side and caught fire at its front end. Traveling on the same highway, Guffey, 39, truck driver, came upon the scene and stopped. He took a fire extinguisher to the vehicle and emptied it on the flames but did not extinguish them and they grew, entering the passenger compartment. Seeing Hakner inside the car, Guffey used the fire extinguisher to break out the window of the front passenger door, which was then atop the vehicle. As Hakner stood and reached toward the opening, Guffey, despite flames at his feet, stepped onto the wreckage at the windshield, reached into the opening, and grasped him. Stepping back to the pavement, he pulled Hakner through the opening, taking him to the pavement, and then dragged him to safety. Flames grew quickly to fill the vehicle, destroying it. Hakner required hospitalization for treatment of his injuries, but he was not burned. Guffey suffered minor burns to his feet as well as cuts and scratches but did not require medical treatment. Both recovered. 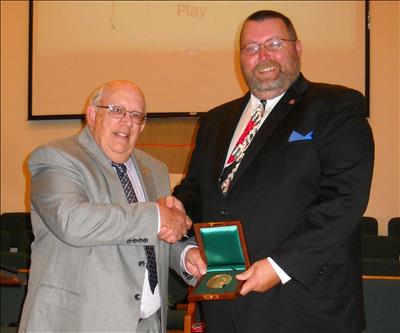