Mark Casto helped to save 54 persons from drowning, Atlantic City, New Jersey, January 14, 1906. A 2,556-ton freighter, the S.S. Cherokee, had gone aground on the Brigantine shoals in the Atlantic Ocean and was taking on water. Casto, 36, commercial fisherman, and a six-man, volunteer crew took Casto’s 58-foot, 10-ton fishing schooner, the Alberta, through 25-foot seas to the scene. After the Alberta maneuvered to within 200 feet of the Cherokee, its two dories were launched in rescue attempts, but one was smashed on the deck by a large wave and the other, with Casto aboard, was broken apart when it hit the side of the Cherokee. Having conferred with the captain of the freighter, Casto returned to his boat in one of the freighter’s lifeboats, taking with him one end of a secured line. By means of that line, the Alberta was pulled closer to the Cherokee. Another lifeboat from the freighter was secured bow and stern by lines affixed to the vessels, and, in 12 trips, it shuttled the 54 crew and passengers from the Cherokee to the Alberta. The Alberta’s return to shore was done under sail, as its engine was by then disabled.

Two gold medals, one of them encrusted with diamonds, and a scrapbook full of clippings were among the souvenirs left by Capt. Mark Casto, of Daytona Beach, Fla., who died on April 18, 1946.

The souvenirs all concern Capt. Casto’s heroic exploits in leading the rescue of 54 persons from the steamer S. S. Cherokee when it was wrecked off Atlantic City in January 1906. One of the gold medals, presented by the Carnegie Hero Fund Commission, was given to Casto along with $6,500 to be devoted to paying off a mortgage and to educating his son.

The diamond-encrusted gold medal was presented to the hero by the exclusive Clover Club of Philadelphia, which also gave him $1,000 at one of 10 huge public dinners in his honor. The scrapbook is filled with story after story from many papers describing the disaster and the rescue.

If Casto and the men did not recognize their heroism, the public did. Funds totalling $4,400 were raised by Philadelphia and Atlantic City newspapers. The Clyde Line gave Casto $500. There were other gifts. He was offered a “dime museum” contract but turned it down.

The publicity continued for several years as babies, dogs, cats, and commercial products were named for Casto. But the fisherman continued to pilot Alberta in search of fish.

Poor health of Casto and his son brought the family to Florida in 1920, but the elder Casto continued to operate two fishing boats which he had bought after the sale of the Alberta. Casto lived at New Smyrna Beach from 1934 until about 1941.

(Edited from an obituary in the Daytona Beach Morning Journal, April 19, 1946.) 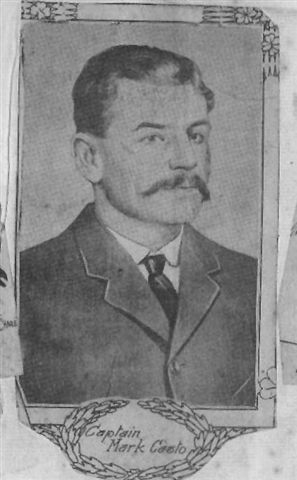