Mark C. Moore helped to save Eleanor P. and John D. Cameron from burning, Tallahassee, Florida, July 5, 2008. Eleanor, 67, was the passenger in a hatchback automobile that was being driven by her husband John, 73, when it was broadsided in an intersection. The force of the impact caused the car’s fuel tank to rupture, and the car burst into flame at its rear, with flames then spreading through the car’s interior. Motorists, including Moore, 48, physician, witnessed the accident. He ran to the passenger side of the burning car and with another man reached inside, grasped Eleanor, who was unconscious, and removed her from the vehicle. After they carried her to safety, Moore returned to the burning car and joined a third rescuer, who had opened the driver’s door. They grasped John, who was dazed, pulled him from the vehicle, and took him to safety as flames in the interior of the car were reaching the front seats. When firefighters arrived within minutes, the car was engulfed by flames. Eleanor and John required hospital treatment for their injuries, but they were not burned. 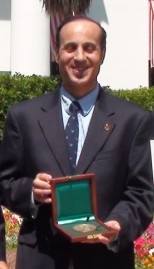