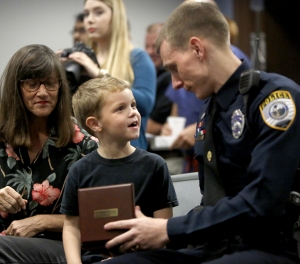 Proud father and grandfather Patrick J. Hopkins III of Jacksonville, Fla., says this photo of his son showing his Carnegie Medal to his own son “looks like a scene from a Norman Rockwall painting and speaks volumes about the good work your institution does for our communities.”

Patrick J. Hopkins IV of Newberry, Fla., an officer with the Gainesville (Fla.) Police Department, was awarded the medal in September 2016 by the Hero Fund, and it was formally presented to him at the department’s biannual awards ceremony in January 2017.  Representing the Hero Fund was awardee Mark C. Moore of Tallahassee, Fla., a physician who received his Carnegie Medal in 2009 for helping to rescue an elderly couple from their burning car after a broadside collision in Tallahassee.  Moore told those at the Gainesville ceremony that “police officers and doctors share a lot of things:  stress, paperwork, and saving lives.”

The photo was taken by Brad McClenny of The Gainesville Sun and is used here with permission.  “I had a feeling (Patrick’s son, Patrick J. Hopkins V) might have a cute reaction when Patrick showed him the medal,” McClenny said.

Hopkins’s heroic actions took place in the early hours of June 26, 2015, when he and other officers responded to a house fire in Gainesville.  Arriving before firefighters, they found that a one-story, wood-frame house was virtually engulfed by flames, and, outside, a woman was screaming for her baby.  Blocked by flames from entering the house through the living room, the officers went to a bedroom window on a side of the house and broke it out.  Heavy smoke spilled through the window, and Hopkins, 26, heard a cough from inside the room.

Boosted by his patrol partner, Hopkins climbed through the window into the room.  The dense smoke limited his visibility to a few inches, rendering his flashlight useless, and made it nearly impossible to breathe.  There were no flames in the bedroom, but, according to investigators, the fire had reached the other side of its closed door.  Hopkins’s partner had been holding him by his belt, but the hold was lost when Hopkins went farther into the room.  Hearing another cough, he rolled across a bed toward the far side of the room and on the floor found the “baby,” who turned out to be a 30-year-old woman who outweighed him.

The woman was unconscious.  Hopkins grasped her and pulled her onto the bed and then across it toward the window.  He stuck his head out of the window for fresh air, but the dense smoke impeded that effort.  Hopkins then maneuvered the limp woman head first through the window to other officers, who took her to the ground.  Hopkins immediately followed, diving head first into the arms of his partner.  Both Hopkins and the woman were treated at the scene and then taken to the hospital, where Hopkins received further treatment for smoke inhalation and numerous cuts.  He recovered.

Although Hopkins responded to the scene as a police officer, the Hero Fund agreed with his department that his actions in behalf of the woman clearly exceeded the line of duty.

The officers’ response did not stop with the woman’s rescue.  Since her family’s residence was a total loss, Hopkins and his partner collected household furnishings and supplies from other officers and department employees and delivered them on their day off.