Kyle Robert Hardman died attempting to help save Hanh Nguyen and others from drowning, Sauget, Illinois, June 12, 2012. Nguyen, 33; two other men; and two young children were occupants of a 16-foot motorboat that became disabled on the Mississippi River. The boat was pulled by a swift current to a stationary fleet of barges, where it struck one of the barges and became lodged against it. A towboat was in the vicinity, and its crew, including Hardman, 55, deckhand, became aware of the situation. Hardman and another of the crew launched their boat’s rigid-inflatable emergency vessel and took it to a point near the stranded motorboat. As the other crewman maneuvered the rescue boat, Hardman threw the free end of a line toward the stranded victims, but to no effect. Although the other crewman worked to control the rescue boat, the current pushed it against the barges, and it capsized, throwing him and Hardman into the river. Hardman was pulled beneath the barges and swept downstream, where he surfaced, inert, and the other crewman was able to climb atop the capsized rescue boat. Crewmembers of an arriving tugboat took both men aboard before going onto the barges to assist in the rescue of Nguyen and the others. Neither Hardman’s crewman nor any of the occupants of the disabled boat was injured, but Hardman could not be revived, as he had drowned.

Kyle Robert Hardman, who was born on Feb. 23, 1957, in Ukiah, Calif., died on June 12, 2012, while assisting in the rescue of a family in a small fishing boat caught between the mighty Mississippi River and the Inland Marine barge on which he worked. Hardman died while upholding the highest honor of the Riverman’s code: “You see someone in distress, you try to assist.”

Not only did Hardman, 55, and his co-worker assist five family members to safety, but, in the end, he sacrificed his own life to save a toddler by lifting the child into her mother’s arms, after which he was swept under the barge.

Hardman was a seasoned mariner who worked for Inland Marine Services of Hebron, Ky. He loved his job and was called “Pappy” by his shipmates, as he was the old guy on the boat and was said to be able to outwork them all.

Hardman was a graduate of Heald’s Engineering School and served in the Army. He spent several years on fishing trawlers on the Bering Sea and was near retirement from working on the rivers. 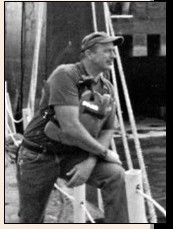