Kirby Crump helped to save Steven G. Sedlacek from burning, West Jordan, Utah, August 10, 2014. Sedlacek, 56, was the pilot of a six-seat airplane that partially lost power shortly after taking off. It crashed landed not far from the runway in a soccer field of a park, coming to rest upright and starting to smoke at its engine area. Semiconscious and severely injured, Sedlacek remained secured in his seat. Crump, 53, was traveling in his vehicle nearby and saw the plane descend. He immediately drove to the scene, as did another man, and both responded to the right side of the plane and stepped onto its wing. A door to the fuselage opened off the wing, which held one of the plane’s fuel tanks. After the other man removed Sedlacek’s wife from the front passenger seat and was taking her to safety, Crump fully entered the fuselage, knelt on the seat, and searched for the release of Sedlacek’s safety belt. By then, flames two feet high were issuing from the engine area and advancing to the cockpit. Crump released Sedlacek’s safety belt and with difficulty pulled his upper body onto the passenger seat as Crump backed from the plane. Standing on the wing, he pulled hard on Sedlacek, inching him closer to the door. The other man returned to the wing and aided in pulling Sedlacek from the plane. Together they carried and dragged him about 20 feet away as flames grew, soon to engulf most of the plane, including the cockpit. Sedlacek was hospitalized for treatment of extensive injuries, but he was not burned. 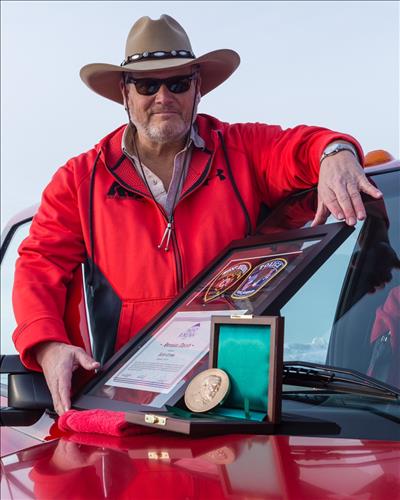