Kali Allen attempted to rescue Jeffrey K. McIlroy from drowning, Catoosa, Oklahoma, January 4, 2018. McIlroy, 55, was partially submerged in an opening in the middle of a frigid, iced-over pond when a woman saw him and alerted Allen, 38, a delivery driver who was parked nearby. Allen stepped onto the ice but returned to the bank upon hearing cracking sounds. After obtaining a foam pool noodle, Allen stepped atop the ice again and slid his feet toward the hole. McIlroy submerged and Allen advanced, entered the water, and submerged in an effort to find McIlroy. Unable to locate him, Allen resurfaced and used the pool noodle to aid his floating because he could not climb out of the water. From a pond bank, responding firefighters tied multiple ropes together and tossed the extended line to Allen, who had punched the ice with his right hand in an attempt to get nearer to them. Once Allen secured the line around his body, firefighters pulled Allen onto the ice and to the bank. A diver later located McIlroy; he had drowned. Allen received treatment at a hospital for hypothermia and experienced diminished motion in both hands for about one month. 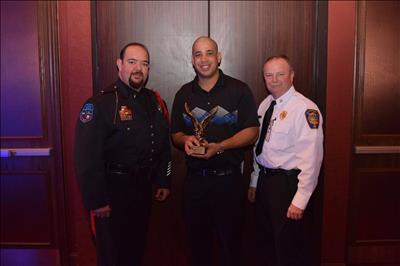