John E. Meffert saved Francis X. Pisano from burning, Irvine, California, June 30, 2017. Pisano, 62, was in a twin-engine plane that had taken off from a nearby airport when an engine problem caused the plane to lose altitude. Pisano was piloting the plane, his wife was in the passenger seat beside him. As Pisano turned back to the airport to make an emergency landing, the plane rapidly descended onto a multi-lane expressway, crashed, and burst into flames. Pisano’s wife opened the door and stepped onto the wing, then remained at the plane as she made efforts to free Pisano from the wreckage. Meffert, 47, fire captain, who was off-duty and out of his jurisdiction, had been driving on the expressway when the front of his vehicle was struck by the plane as it flew past and crashed nearby. Meffert stopped and ran to the plane where he climbed onto the wing and aided Pisano’s wife away from the plane. Despite flames several feet high on the wings, Meffert returned to the plane, stepped onto the wing a second time, and extended his upper body through the door to free Pisano’s foot from the wreckage. Meffert grasped Pisano under the arms and pulled him from the plane. He then dragged Pisano to safety as the plane continued to burn. Pisano was transported to a hospital for treatment of fractured vertebrae and other injuries. He was not burned. 89211-10039 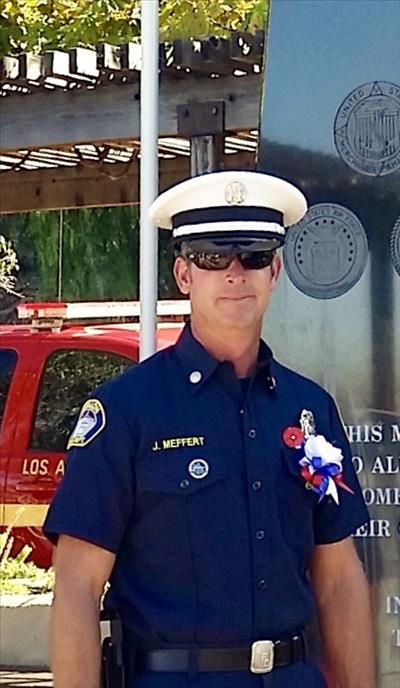