Jason Ewing helped to save Charity D. Vaughn from burning, Lewiston, Idaho, November 28, 2010. Vaughn, 35, was in her second-floor apartment after its neighboring unit caught fire at night and filled the apartment with dense smoke. On duty as a volunteer reserve police officer, Ewing, 36, business operator, responded to the scene after being alerted to the fire. Hearing Vaughn screaming, Ewing and other responding officers set out to locate her. They ascended a set of outside stairs to reach the back door to Vaughn’s apartment. After one of the others officers kicked in the door, Ewing went to his stomach and, despite heavy smoke in the apartment that severely restricted visibility, crawled through the kitchen. Another of the officers followed at his heels, also crawling. Then seeing Vaughn in her bedroom, Ewing told her to go to the floor. He grabbed her by the wrist and began to pull on her, the other officer joining him. Standing, that officer grasped Vaughn and pulled on her as Ewing pushed, and in that fashion they retraced their path, taking her across the floor to the back door. After helping Vaughn regain her footing, the officers aided her down the stairs to safety. Ewing suffered smoke inhalation, for which he required overnight hospitalization. 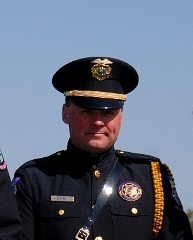