Helen Goulet rescued Rose E. Downing from burning, Courtenay, British Columbia, January 25, 2015. Downing, 89, was in her one-story house after fire broke out in the living room and filled the structure with dense smoke. A friend, Goulet, 72, retired cashier, was in the house’s attached garage, which was at one end of the structure. Hearing a scream, she exited the garage to the outside and saw smoke issuing from the living room area, which was at the other end of the house. Goulet entered the house’s back door and was confronted by intense heat and a wall of black smoke. She closed her eyes, held her breath, and, following the sound of moaning, moved about 12 feet through the kitchen toward the fire. Goulet found Downing on the kitchen floor, face up, at the kitchen’s entrance to the open living and dining area. She grasped Downing’s arms near the shoulders and dragged her through the kitchen and to the back door and outside to safety. Both women required hospital treatment, Goulet suffering smoke inhalation. She recovered. 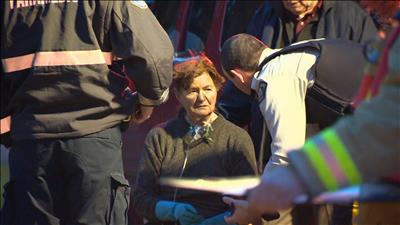