Graham W. Fath helped to save James P. and Ryan J. Elenz from drowning, Oglesby, Illinois, June 28, 2013. Elenz, 45, and his son Ryan, 10, were rafting on the Vermilion River when their raft became caught in the rolling boil of water at the base of a low-head dam. Kept at the face of the dam by the strong current, they could not free themselves as water flowing over the dam entered the raft. In another party, Graham, 11, student, and his brother and two other boys were approaching the scene in a raft and saw that Elenz and his son were stranded. From a point below the dam, the four boys took their raft to Elenz’s. Elenz handed Ryan over to the boys, but then the boys’ raft became caught by the current and held against the face of the dam and Elenz’s raft was released. Elenz went downstream to alert help as Graham and the other boys used their paddles and hands in an attempt to get out of the boil. Water over the dam entered the raft, and two of the paddles were lost to the river. Two kayakers came upon the scene several minutes later and from the bank threw one end of a line to the boys. The kayakers then pulled the raft from the boil and to safety. Ryan was treated at the scene for mild hypothermia. Graham was cold after the rescue but with the other boys resumed rafting down the river.

Graham Will Fath, 16, of Schaumburg, Ill., died on March 11, 2018. A son of Holly and Dennis Fath, he was born on July 3, 2011.
Graham was a member of the James B. Conant High School band and French Club, a student broadcaster for sporting events, a future French exchange student, and was involved with the Hoffman Estates police explorer program.

(Edited from an obituary published on the website for Ahlgrim & Sons Funeral and Cremation Services of Schaumburg.) 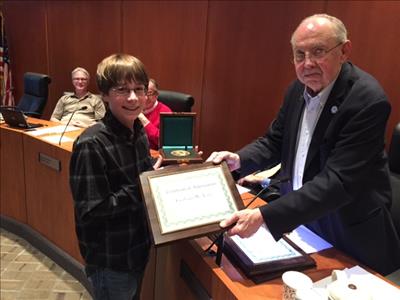