Eugene Stamsta helped to save Anne M. Nerenhausen from drowning, Oconto, Wisconsin, July 18, 2017. While attempting to jump onto an inner tube at a river bank near her house, Nerenhausen, 75, fell into the water and struggled to swim in the swift current. From the bank, her fiancé repeatedly lobbed the inner tube, tethered to a rope, toward Nerenhausen, but she could not hold onto it. Nerenhausen was carried downstream. The fiancé yelled for help, alerting neighbors, including Stamsta, 65, welder/fabricator, who ran to a rocky embankment at a point adjacent Nerenhausen that was about 4 feet above water level. Stamsta, clothed and wearing a tool belt, entered the water and swam to Nerenhausen. Arriving as she began to submerge, Stamsta grasped Nerenhausen, who was limp. With his right arm under her armpit and across her chest, Stamsta stroked with his left arm back to the rocks, towing Nerenhausen. There, he secured a hold but was unable to remove her until firefighters responded with a board and ropes to lift her to safety; Stamsta exited on his own. Nerenhausen was hospitalized for one night and treated for hypothermia; she recovered. 89368-10051 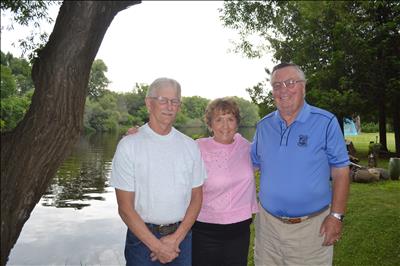