Eric Martin helped to save Arnetta D. Johnson from drowning, Ohiopyle, Pennsylvania, June 26, 2017. At a bridge pier in the middle of the swift-flowing, swollen Youghiogheny River, Johnson, 55, partially submerged, clutched an overturned raft pinned by current against the pier as her friend lay atop it. With a 20-foot-high waterfall nearby downstream, they tenuously held on amid the cold, fast current while onlookers called for help. Alerted by the emergency response to the scene, Martin, 47, whitewater rafting business operator, and another man obtained single-person kayaks and launched them without standard safety gear. As Martin arrived at the pier, Johnson grasped onto his kayak; the raft dislodged and floated free with the friend. While Martin towed Johnson downstream toward the nearest bank, stopping at an exposed rock ledge, the other man paddled downstream to the raft and used his kayak to push it, and Johnson’s friend, to safety at the bank. The man then paddled to the ledge. After securing Johnson with a rope and abandoning the kayaks, Martin and the man waded with her toward the bank, where others also helped her from the water. Johnson declined treatment for minor injuries. 89909-10061 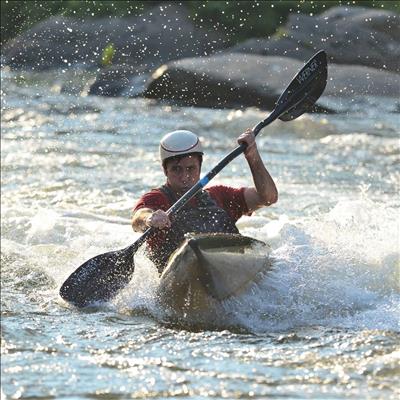