Clifford W. J. Peterson helped to save a man from falling, Toronto, Ontario, December 8, 2013. At night, a distressed 26-year-old man sat atop a bridge abutment at its outside edge, that point being about 100 feet above the floor of a wooded valley. On being alerted to his presence there, Peterson, 40, police constable, and his partner responded to the bridge deck at the abutment. As the concrete structure was six feet across and its top five feet above the level of the bridge deck, Peterson boosted himself up to the top of the abutment, which was covered with an inch of snow and ice. When the man then moved closer to the edge and pushed himself off, Peterson lunged across the abutment, grasped the man from behind, and, lying unsecured on his stomach, held the man against the outside face of the abutment. The man began to struggle against Peterson, pulling him partially off the abutment. Peterson’s partner had advanced on the deck to the abutment, grasped Peterson by the ankles and then the legs, and pulled on him as Peterson backed from the edge, dragging the man. Peterson and his partner took the man to the deck of the bridge and secured him. Peterson sustained scratches and bruises on his arms and legs but fully recovered. 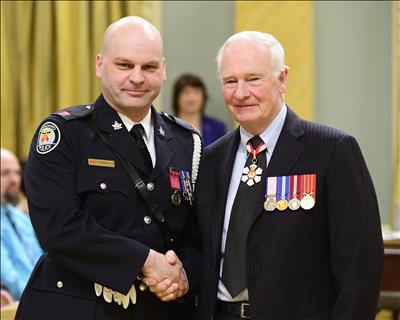