Clerc Higgins Cooper helped to save two men from drowning, New Orleans, Louisiana, January 13, 2008. Two men and a woman were aboard a small motorboat that became disabled and then swamped in Lake Pontchartrain at a point about 500 feet from shore. Clerc, 14, student, and two friends, who had just left a nearby harbor in a 19-foot sailboat, saw the disabled craft and responded toward it. When a woman who had been on the boat jumped from it and swam toward the approaching sailboat, Clerc removed her lifejacket and threw it to her. The disabled boat capsized about then, sending the two men into the 58-degree water, where they struggled in its two-foot chop. As Clerc’s friends worked to pull the woman aboard the sailboat, Clerc took a flotation device and, without removing any items of attire, entered the water. She swam about 20 feet to the two men and gave the flotation device to one of them. Clerc then swam to the capsized boat and located another flotation device, which she gave to the second man. As her friends returned the woman to shore, Clerc waited atop the exposed hull of the overturned boat. A man and his son arrived shortly in a small, inflated dinghy, took the two men aboard, and returned them to shore as the overturned boat with Clerc atop it was carried by the wind and waves toward a seawall along the shore. Her friends returned in a motorboat for her and took her to safety. Clerc was cold and bruised, but she recovered. 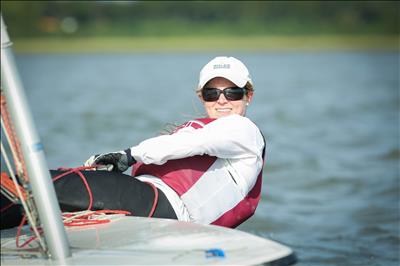