Charles T. Carbonell, Sr., saved Denise C. Guzman from burning, Lakeland, Florida, November 14, 2011. Guzman, 41, was trapped in her sport utility vehicle after an accident in which the vehicle rolled off the highway and came to rest upside down in a stretch of wetland. Fire erupted in the engine compartment and spread to the exposed underside of the vehicle. Guzman struck at a window and shouted for help. Carbonell, 54, furniture restorer, had been traveling behind Guzman and witnessed the accident. Stopping at the scene, he ran to the burning vehicle, his footing compromised by the wetland mud. Carbonell pulled on the driver’s door, which was unlocked, but the mud prevented him from opening it appreciably. After some struggle, he succeeded in opening the door wider. He then leaned head first into the vehicle despite flames spreading from the front of the undercarriage toward the back; flames were also visible inside the vehicle, on the dashboard. Carbonell grasped Guzman and pulled her out of the vehicle. He stood her on the ground, but as her feet sank partway into the mud, he picked her up and carried her back to the highway. Neither Guzman nor Carbonell was injured. 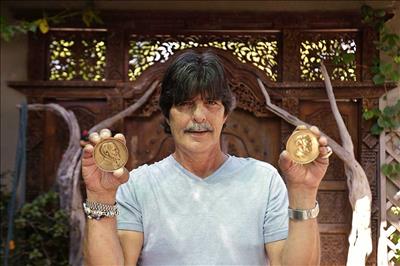