Charles E. Britt saved Justin O. Dutton from burning, Norfolk, Virginia, November 3, 1997. Justin, 5, was in a first-floor bedroom of his family’s house after fire broke out in the attached garage at night. A neighbor, Britt, 73, retired fire captain, was alerted to the fire by Justin’s mother, who told him that Justin remained in the house. Britt ran to the burning house and stepped into the living room, where dense smoke precluded visibility. As Justin’s father maintained voice contact with Justin, Britt, crouching, made his way to the bedroom. He found Justin and grasped him, then retraced his path to the front door as flames were breaking into the house from the garage. Three other people in the house died in the fire. Justin was treated at the scene for mild smoke inhalation.

NORFOLK, Va. – Capt. Charles E. Britt, Jr., 96, succumbed on November 12, 2020 due to injuries received in a recent fall. Raised during the Depression by his grandmother, he was born May 10, 1924 in Salisbury, North Carolina to Ruby and Charles Britt. Charlie volunteered for the WWII draft near the end of his senior year in high school and was inducted into the Navy May 28, 1943. After boot camp he was assigned to LST-128. A plank owner, he remained on her throughout the duration of the war, becoming a Signalman 2nd class. He was involved in supplying troops during some of the fiercest Pacific battles of WWII, including Iwo Jima, Tarawa, Kwajalein, and Saipan.

In Norfolk Fire he was stationed with Capt. Johnny Butler for 3 years before finding out that while Charlie was ferrying supplies to troops on Iwo Jima, Johnny Butler had been pinned down on the beaches of Iwo Jima cussin’ the sailors because it was taking so long to get supplies! The war wasn’t something either ever wanted to talk about. Despite all he went through during WWII, he looked back fondly on his years in the Navy.

Charlie was hired by Norfolk Fire Department September 12, 1949 and retired with just shy of 38 years of service to the citizens of Norfolk on July 1, 1987. Once hired, he devoted the rest of his adult life to his family and the fire service. A good firefighter and a respected fire officer, Captain Britt was knowledgeable, a good leader and a fun-loving instigator.

His fire service commitment ran deep – in 1997, when he was 73 years old, a late-night fire broke out across the street from his home. Having been alerted by the mother, Charlie ran over, entered the burning building and was able to rescue a 5-year-old boy although 3 other family members perished in the blaze. As a result of his heroic actions, Charlie was selected as a recipient of the Carnegie Medal. Awarded by the international Carnegie Hero Commission, it was founded by Andrew Carnegie in 1904 to recognize “… a civilian who voluntarily risks his or her life to an extraordinary degree while saving or attempting to save the life of another person…” As a result, Norfolk Fire-Rescue created the Captain Charlie Britt Life Saving Award. This is the highest award granted by Norfolk Fire-Rescue. An altogether extraordinary life indeed – although he would never say so or even agree.

He and his wife Marian (whom he lost in 1992 after 45 years of marriage) raised 3 children and were devoted to them and their grandchildren including a deaf grandson, Chris, who Charlie delighted in communicating in sign language. Charlie is survived by his 3 children – Thomas Britt (Phyllis,) Deborah Brinkley (Cy) and Jane Hines (Paul), 7 grandchildren, 11 great grandchildren, neighbors’ children, and more beloved friends and co-workers than can be counted. Charlie was predeceased by his wife Marian and his grandson, Chris. 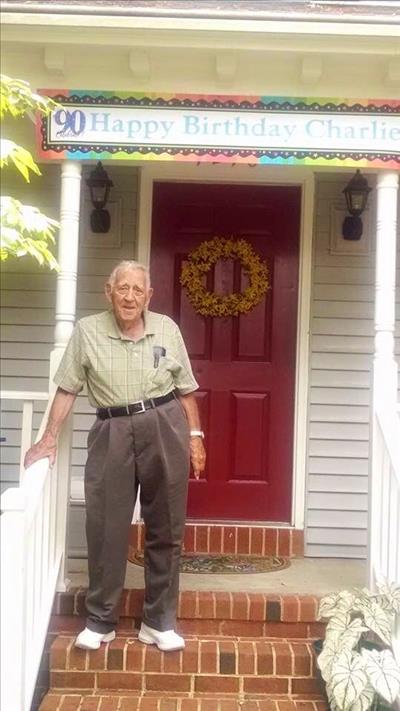