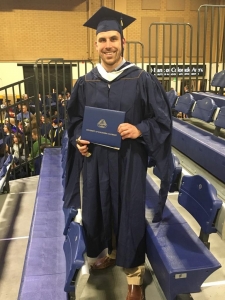 I am writing to express to you my gratitude for allowing me the opportunity to pursue my career in education.  Because of your help, I have not only been able to achieve everything I have wanted to as a teacher and coach, but I have been able to complete my master’s in educational leadership and policy studies at the University of Northern Colorado.

As you know, I pursued education because of the impact that you can have on people.  I discovered this both before I began my pursuit of education and since I have been a teacher myself.  When I was a senior in high school, I lost my father and grandfather in a tragic accident.  While it was devastating at the time, I gained many things from it, including a heightened sense of responsibility and the impact that you can have on individuals and an entire community.  It has been a goal of mine to obtain an opportunity to serve as an administrator and become a leader in a community like the one that swooped me up and made me their own when I lost my father and grandfather.

I can honestly say that I would not be anywhere near reaching my goals if it was not for the Carnegie Hero Fund Commission.  Because you have been so generous and willing to help me serve in my father’s and grandfather’s memory, I have already been able to impact people in some way within education.

I cannot thank Commission enough for the opportunities that it has provided me and all that they have allowed me to do.  I will likely never be able to pay back what I have been given by the Commission, but I can promise that I never take this for granted and that I will continue to try and make that impact grow with everything I do.  I intend to be a school leader for many, many years, and to pursue my doctorate, so that I can become a district leader (hopefully a superintendent) in the future.

Thanos is a son of Mark John Thanos and grandson of John Mikel Thanos, both of whom were posthumously awarded the Carnegie Medal in 2009 in recognition of their attempts to save a boy from drowning in a flooded culvert in 2008 in Chesterton, Ind.