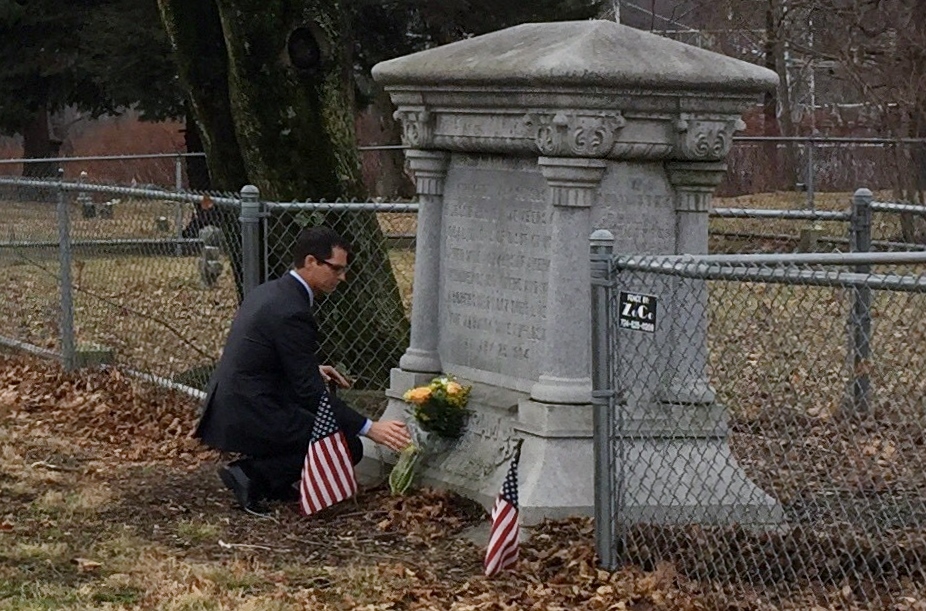 More than a century ago, on January 25, 1904, a massive explosion tore through the 200-foot-deep Harwick Mine in Southwestern Pennsylvania, claiming the lives of 179 miners and two rescue volunteers.  The accident was described in a pamphlet published shortly after the disaster “as if the earth had suddenly parted and had broken in two.”

Immediately after the explosion, calls went out for volunteers for aid.  Selwyn M. Taylor, 42, and Daniel A. Lyle, 43, both entered the Harwick Mine in an attempt to locate any survivors — but they both died.

In New York, news of the tragedy reached Andrew Carnegie.

“I have thought over the idea (of a Hero Fund) for years, and the Harwick Mine disaster brought it to a head.” — Andrew Carnegie

On Wednesday, January 25, 2017, Carnegie Hero Fund Commission Executive Director Eric P. Zahren laid flowers at two memorials that remember the Harwick Mine disaster victims, a tragedy that occurred 113 years earlier.  One bouquet was left at the mass grave, where many of the killed miners were buried.  The other was left at the Harwick Miners Memorial near the Allegheny Valley Volunteer Fire Department.

“It is important that we never forget the tragic events of that day and the sacrifice of the Harwick miners. We remember and honor the many victims and heroes, and in a special way, those who were both,” Zahren said.