The first paid lifeguards of Laguna Beach, Calif., were hired in the summer of 1929, two years after the sleepy and somewhat isolated little town was incorporated as a city.  Before then, Pacific Ocean rescues were made largely by Laguna Hotel and Bath House employees or skilled fishermen, and any records of them are extremely scarce…except for one by Andrew J. Ryan, who on Sept. 3, 1926, saved a woman from drowning in rough surf conditions off Arch Beach at Woods Cove, about a mile south of the main beach.  Ryan received the Carnegie Medal for his actions.

Born in Ireland, Ryan—“Pat”—was 44 that year and owned and operated a grocery store with his wife along the recently completed Pacific Coast Highway.  He also sold real estate to supplement a $48 monthly veteran’s disability pension.   Ryan was in his store on the afternoon of the rescue when summoned by several women from the beach 250 feet away.  He had often swum in rough water at the scene and was thoroughly familiar with conditions there.  The Hero Fund’s investigator reported that Ryan had made several rescues at the cove during the past six years.

From the Hero Fund’s archives:  Mrs. Willamette H. Phinney, a 37-year-old housewife, had gone to the cove and went in bathing.  She held to a life-rope that extended from the beach into the water as she jumped the breakers.   Seeing a large breaker approaching, she let go of the rope to dive through it but was then tossed and rolled about by a succession of breakers and carried into rougher and deeper water along the rocks in the cove.  She became frightened and called for help and, exhausted by her efforts to swim in the rough water, was carried farther out.  People on shore had tried to throw a life buoy to her, but the waves carried it back toward shore.

Ryan “had served in the World War and had been shot down in an aeroplane,” according to the Hero Fund’s report, leaving him with intestinal ailments.  Too, he was somewhat crippled with arthritis, walking with considerable difficulty and not having the full use of his left leg in swimming.  However, he was known to be a good swimmer, as remembered by a young Laguna local:  “Pat would come to visit Woods Cove often by himself, sit on a towel, bake himself to a nice oatmeal-cookie brown, and then periodically swim out to the farthest of the rocks in the cove.  His swim out and back seemed a long way at the time.  Accordingly, the rock became known as ‘Pat’s Rock,’ and I suppose it still is.  I just wish I had known Pat was in the real estate business and I had $25 to buy a beachfront lot from him.”

Alerted to Mrs. Phinney’s plight, Ryan walked as quickly as he could to the water’s edge, where two women helped him remove his clothing to his underwear.  As Ryan was about to enter the water, someone threw the buoy over his arm, but he cast it off, thinking it would interfere with his swimming in the rough water.   Hearing Mrs. Finney call for help, he plunged in after a large breaker passed and swam 150 feet directly out and then 100 feet over to her.  He spoke reassuringly to her and told her to assume a floating position.  Ryan then held the back of her bathing suit with his left hand and with his right arm and leg swam toward shore.  Close to the beach they were met by a swimmer or two with the buoy and then made it to shore.  Mrs. Phinney was “rather weak” after her ordeal, and Ryan, who had been in the water for 10 to 15 minutes, was very tired.   He spent the remainder of the afternoon in bed.

Answering the Hero Fund investigator’s questions as to risk, Ryan stated that the swells “had looked mountainous to him” and that he recognized the possibility of being thrown against the rocks and killed, but he was of the opinion that a previous rescue he had performed there had been attended with more danger.  Ryan stated that at one time a boy had been thrown on the rocks by a wave and was fatally injured.

Ryan was awarded the Carnegie Medal in 1929, along with a grant of $1,000.  According to his family, he gave the medal to his sister, Nora O’Regan, but the current location of the medal is unknown.  In 1994, a man from National City, Calif., contacted the Hero Fund’s offices to inform that he had acquired it at an estate sale.  Ryan died on Nov. 24, 1955, in Ireland. 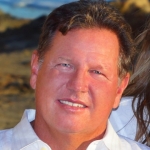 Kai Weisser, a retired Huntington Beach marine safety officer, is writing a book on the history of Laguna Beach lifeguards.  A former lifeguard, junior lifeguard instructor, and rescue boat operator, he is the author of Huntington Beach Lifeguards, released in 2008 by Arcadia Publishing.