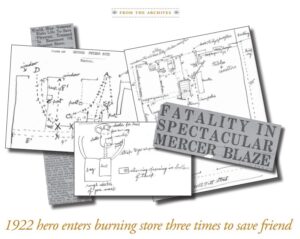 On the morning of March 2, 1922, an alarm sounded after a fire broke out in the basement of the T.A. Houston department store in Mercer, Pennsylvania. Responding to the alarm, a bevy of volunteer firefighters, including George P. Boyd, an automobile painter, and Claude W. Gillette, a mechanic, boarded a fire truck and drove to the alley behind the store.

After realizing conditions inside the building were too smoky to enter safely, Boyd called out to his fellow volunteer firefighters, urging any of them with military experience to return home and retrieve their gas masks before entering the burning building. Boyd, attempting to lead by example, drove a few blocks back to his Mercer home and retrieved his gas mask.

Meanwhile, two firemen carried a firehose into the rear of the building to quench the raging fire in the basement. Despite pleas from a superior, Gillette, a man known for his willingness to enter the fray despite immense danger, followed the two firemen into the hallway to assist with the hose. The three men descended the stairway to the basement and sprayed water into the room. Great plumes of smoke reduced visibility to a few feet and pushed Gillette back up the stairs and out into the alley.

Gillette was given a gas mask by a fellow firefighter before rushing back into the building. Inside, the two firefighters manning the hose abandoned it after smoke continued to fill the doorway. As they exited the building, they encountered Gillette, who bumped into one of the men. Gillette, disoriented by smoke and his run-in with the others, stumbled northwest past the basement doorway and stairs and into a first-floor storeroom.

Men in the alley could hear Gillette’s muffled cries for help. The entire company was under the impression Gillette was trapped in the basement. Many of them attempted to enter the building, wet clothes or fabric pressed against their mouths and noses, before being overcome by smoke only a few feet inside. Tension was palpable as many of the men exited the building without Gillette in tow as the fire continued to spread. 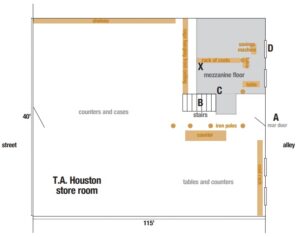 Boyd returned to the department store with a gas mask in hand. Despite pleas from others to remain outside the building, Boyd affixed the gas mask to his face, and, ingeniously, wrapped a rope around his torso so that, in the event he located Gillette, the men outside could pull him to safety through the dense smoke.

With the rest of the men looking on, Boyd stooped down near the rear entrance of the building and proceeded inside. Crawling on his hands and knees, he hoped he would avoid the noxious smoke swirling above. Boyd crawled through intense heat toward the basement stairs and descended two or three steps before he was forced backward by the temperature of the floor and surrounding walls.

As he retreated, the mouthpiece to his gas mask dislodged and he inhaled smoke, causing him to cough violently. Seconds later, the firehose that lay on the stairs writhed about and struck Boyd in the back. He attempted to wrangle the hose and remove it from the hallway, but it
overpowered him. Disoriented, his lungs filling with smoke, he once again returned to his hands and knees. He crawled northeast, accidentally wrapping the rope he was tethered to around an iron pole just a few feet from the basement stairs. As he tried to untangle the rope, the nose clip holding his gas mask in place fell off, allowing even more smoke to enter his body.

Firemen outside felt the rope tugging as Boyd unwrapped it from the pole. They quickly pulled him from the fire. Overcome with grief, the store owner urged him to remain outside, fearful that another attempt to retrieve Gillette would be pointless.

His clothes steaming and his eyes bloodshot, Boyd lay in the alley coughing before a fireman who had entered the building with Gillette mentioned that he ran into someone moving north, away from the stairway on his way out. Boyd, now convinced that Gillette wasn’t in the stairway, but rather one floor up, said that he would make another attempt. Boyd ignored anyone who tried to dissuade him in an effort to save his friend.

After readjusting his mask and reattaching the rope to his midsection, he was helped back to the building. Crawling toward the north side of the doorway to the basement, he continued on about another 3 feet and reached out, searching for Gillette’s body, but could not locate him. Smoke seeped into the gas mask and Boyd was forced to remove it, which caused him to cough violently as the temperature of the room climbed as the flames in the basement spread.

Still unable to find Gillette, Boyd turned south and tugged on the rope that was tethered to safety. With the help of firemen outside the building, he crawled back through the smoke-filled room. Outside, he yanked off the gas mask and coughed repeatedly as another firefighter slapped his back, causing him to scream out in pain. 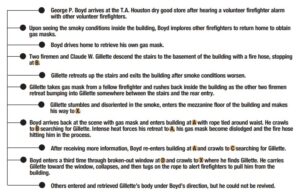 Battered, beaten, and exhausted, Boyd lay in the alley behindT.A. Houston’s department store frantically gasping for air. He had attempted to retrieve Gillette several times but was pushed back by smoke and heat. All this in spite of repeated pleas that he abandon the mission. Moments after his last unsuccessful attempt to rescue Gillette, he was alerted that a fireman had broken the north window of the east wall with a pike, and recognizing one final opportunity, Boyd returned to his feet, adjusted his gas mask once more, and entered the building through the smashed window.

Within seconds, firemen outside lost sight of Boyd. Crawling west, he fanned his arms out hoping to bump into Gillette. After covering 18 feet, he reached out once more and finally found Gillette, who was lying flat with his gas mask still in place. Crouching next to Gillette, Boyd put his right arm between the man’s legs and his left arm beneath his neck and shoulder. Boyd stood up with Gillette in tow and moved toward the window. He spit out the gas mask mouthpiece and yelled out, “I’ve got him.”

As he attempted to exit the room with Gillette, Boyd’s right foot was tangled in burlap, causing him and Gillette to collapse to the floor. Boyd tugged on the rope and firefighters outside yanked the two men across the storeroom floor. Finally, within a few feet of the window sill, Boyd released his grip on Gillette and stumbled to his feet, laying his upper body across the windowsill before being pulled out into the alleyway by firemen eagerly awaiting their return.

A large piece of burlap wrapped around his foot, Boyd collapsed to his knees outside the building and yelled, “he’s in there,” as he pointed toward the window. Firemen retrieved Gillette’s body and attempted to resuscitate him, but he could not be revived.

Gasping for air and steam rising from his clothing, Boyd fainted momentarily before being rushed to the hospital for smoke inhalation. He valiantly reentered a building on fire in order to save a friend against all protestations and warnings to the contrary. After inhaling significant amounts of smoke, Boyd recovered several weeks later and was awarded the silver Carnegie Medal and a monetary grant of $1,000.