It has been nearly a year since I embarked on a project to understand the biological basis of heroism by engaging willing recipients of the Carnegie Medal.  The big surprise to me has not been the biology (yet), but rather the heroes’ personal stories.

Some of the awardees responded by email to the invitation to participate in the study, but many more have called, which has given me the good fortune of personally interacting with a wide variety of Carnegie heroes.  These conversations are important because I am asking people who volunteer for the project to feel that they can trust me and be free to ask anything about it.

Still, the early calls pushed me out of my comfort zone.  I’m a biologist.  I’m more comfortable in the lab, chasing birds, or crunching numbers in front of my computer than I am with talking to people I don’t know about their very personal experiences.  So it was with a bit of nervous energy that I undertook my first discussions with the medal awardees.  Some of the conversations lasted a few minutes, but others have gone up to a full hour.  We talk about the project, their experiences, and the aftermath of their heroic acts.  Some get emotional and shed tears while they recount their stories, and I admit that sometimes I have quietly joined them.  All conversations have ended with me gaining a deep appreciation for each person’s experience.

My nervousness in the first calls was that I might refresh old emotions that the heroes would prefer to forget.  Hadn’t they given enough the first time around?  I was naïve to think that I was the first to ask them for details.  It turns out that most were willing—even needed—to tell their story.  For some, the heroic act didn’t seem like such a big deal, and for others, it was a very emotional event.  Even those who suffered deeply seemed to find a form of therapy in talking about their actions.  In fact, quite a few said that talking about their experience was really important to others who shared in it, and in some cases, the shared experience led to a deep bond or friendship with the person they rescued or with others who were present.  As Commission Chair Mark Laskow said in the March 2017 issue of imPULSE, sharing these stories provides optimism and community—something the awardees I talked to seemed to intuit.  By openly sharing their experiences, a great many of these heroes keep giving.

While each of the heroes’ experiences was unique, it struck me that there is a common thread to many of the conversations.  I read the summaries provided by the Hero Fund before calling the study participants, and my conclusion in each case is that the person’s action really is heroic.  However, one thing that nearly every awardee tells me is that anyone else would have done the same thing if given the chance; the awardees don’t think of themselves as heroes.  But are they right?  Would anyone else do the same things they did?  On the best of days I flatter myself with the thought that I would jump in and help, but if I’m honest, I have to admit that I just don’t know what I would do.  Wanting to do something is quite different from acting when a split-second decision is important.  Most of the heroes are skeptical when I tell them this, but they acknowledge that not everyone around responded as quickly as they did.  Maybe this is what makes heroes unique:  Might they respond more quickly than others?

The other big surprise in a number of the conversations has been the heroes remarking that they have family members who have been given an award (such as a medal of valor, a governor’s medal, or even the Carnegie Medal) for helping those in distress.  Quite a few had not thought much of this until they received the Hero Fund’s letter about my project and wondered a bit about genes.  Stories of a family member’s heroic act could make another person more likely to help when the occasion arises, and this is interesting from a social perspective (the stories spread goodwill, as Laskow pointed out), but it can also confuse or hide a possible genetic effect.  What struck me in conversations with the heroes is that some only learned about a family member’s heroic act when they themselves received the Carnegie Medal.  Family traditions and values could underlie these connections, but they still encourage me in exploring whether genes play a role in altruism.

At the end of each of these diverse conversations, I’m left with feelings of both awe and optimism regardless of what I will find in my research.  Even after interacting with more than 100 heroes, that sense of awe remains after every single conversation.  Each story is different, but all are really, truly amazing. 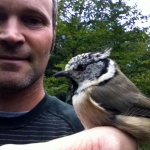 Dr. Chaine is a research scientist with the National Center for Scientific Research in Moulis, France.  A native of Oakland, Calif., he did his undergraduate work at the University of California, San Diego, and then earned his doctorate in behavioral ecology at the University of California, Santa Cruz.  His research focuses on the links between cooperation and conflict in social dynamics, the structure of social groups, behavioral interactions within species, and social communication.  He works on diverse systems, including micro-organisms, sea slugs, lizards, rodents, birds, and humans.