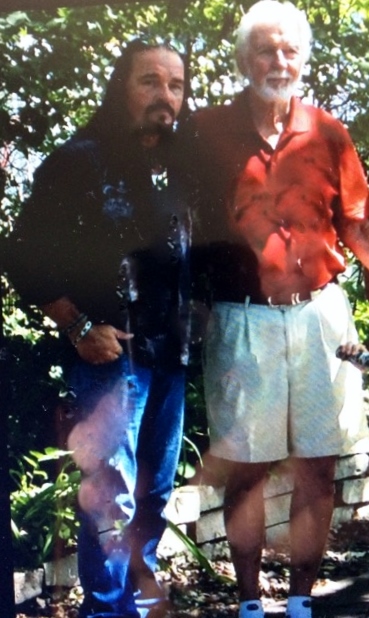 Derrick M. Johnson, left, and the man he rescued from an attacking dog, Galen H. Carlson

Carlson, 78, was walking his dog on a residential street when a 97-pound, adult pit bull approached and charged them, knocking Carlson to the pavement. The pit bull mauled Carlson’s dog, killing it, and bit Carlson on the hand.

Working at a construction site nearby, Johnson, 51, equipment operator, was alerted to the attack. He responded to the scene, finding Carlson, bloodied, still on the pavement with the pit bull continuing its attack on him.

Johnson ran to the dog and, grasping it by the collar, pulled it away from Carlson. He struck the dog’s head against the pavement and, using his weight, forced the dog’s body to the ground to immobilize it. As the dog was fighting against him, Johnson shoved it away, ordering it to leave, but it remained at the scene, menacing Johnson and Carlson. Johnson was using a wooden post in his attempts to ward off the dog when police officers responded shortly and helped him secure it.

Carlson was taken to the hospital for treatment of a bite wound and other injuries.