M. Neil Jones, Sr., helped to rescue Louis J. Cioci from assault, Johnson City, New York, March 31, 2014. Cioci, 42, a police officer, was attempting to arrest a deranged man who had just shot another officer on the street outside a hospital. The assailant took Cioci to the pavement, got onto his back, and struggled against him for his gun, and he managed to fire it. Cioci shouted for help. Jones, 60, a valet supervisor who worked at the hospital, witnessed the assault on the officers. He and a hospital security guard approached Cioci and the assailant and pulled the assailant off Cioci’s back. Although he had sustained multiple gunshot wounds himself, the assailant struggled against the men as they subdued him and Cioci put him in handcuffs. Jones suffered a heart attack shortly after the rescue and required three days’ hospitalization. He recovered. 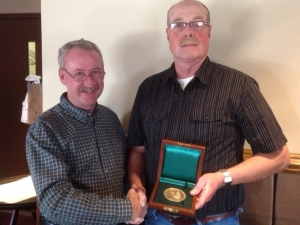 Neil Jones, Sr., right, of Binghamton, N.Y., was at his job as a hospital valet supervisor when he helped to save a Johnson City, N.Y., police officer from an armed assailant on March 31, 2014, in Johnson City. Jones and another hospital employee witnessed the assault, pulled the man off the officer’s back, and helped to subdue him. For his actions, Jones was awarded the medal in June, and in October it was presented to him by Michael T. Chura of Baldwinsville, N.Y. Chura received the medal in 2011.