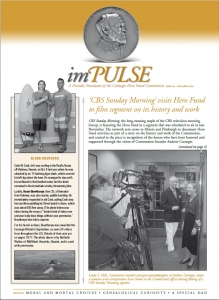 The December 2016 edition of imPULSE, the Commission’s quarterly newsletter, can be read online. This issue includes resumes of the latest awardees’ heroic acts, as well as a look back at the Commission’s roots, with articles on a visit by the crew of CBS Sunday Morning to film a segment on the Hero Fund’s history and work, a ceremony in Illinois honoring four Carnegie Heroes (Ivah J. Coles, who was awarded in 1905; Robert Bruce Ogg [1932]; Robert H. Rutherford [1932]; and Arthur Eugene Burke [1939]), and an essay on family and the culture of heroism by the great-grandson of Adolph Gunia, the lone survivor of the Harwick coal mine disaster that inspired Carnegie to create the Fund.

Furthermore, other features include an article on the design of the Carnegie Medal, a piece on a documentary that includes the role of Carnegie Hero Amedeo Pancotti in the Knox mine disaster, and an essay by Executive Director Eric Zahren that extols the integral role police and other first responders play in the Commission’s investigations of acts of heroism.

Finally, in other news, Michael J. Thanos, who is the the son of Mark John Thanos and grandson of John Mikel Thanos, completed an internship with Delta Air Lines, the Carnegie Hero Funds World Committee gathered in The Hague, and, in From the Archives, we look back at a 1910 visit by the Carnegies to Santa Cruz, Calif., which included a tour of the Carnegie Library of Santa Cruz, which was built seven years earlier with a $20,000 grant from Carnegie.